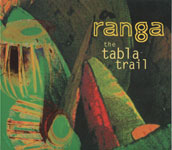 On The Tabla Trail you can hear the confluence of Indian Tabla, transparent keyboard surroundings aqnd some outstanding ambient moods.

I bought Ranga’s first album after listening to the first track at a CD store in KL one morning and it remains one of my all time favorites, so I had been looking for the next album for a while. Initially I was not as moved as I had been with Radient Awakening even though there were some great tracks. It wasn’t until I gave it a listen on good sound system a few times that it really began to grow on me. It is a wonderful ambient soundtrack that grows on you with repreated listening. I would urge folks to listen to the last track loud and on a good system. I look forward to the next album!

For downloads
go to iTunes